In 2003, when it was identified that there were no health promotion summer schools east of Toronto, Patsy applied for and received a grant from Health Canada Atlantic to conduct a needs assessment in Atlantic Canada. 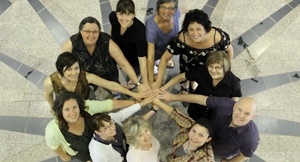 An Advisory Committee with representatives from the four Atlantic Provinces was formed to guide the process. Results confirmed the need for community based training to promote collaboration across sectors of health promotion, social development, crime prevention and community safety. The search for funding began.

With funding secured from the National Crime Prevention Strategy, the first bilingual Atlantic Summer Institute on Healthy and Safe Communities (ASI) was held in August 2004 followed by seven successful curriculum-based summer programs. Three-year funding from Status of Women Canada allowed for the creation of regional workshops and a three-day program at ASI 2012 to increase the leadership capacity of women and girls in the Atlantic Region. The ASI also collaborates with other organizations to host workshops on topics such as health equity and intergenerational mentorship for women. The Quaich provides project management and serves as secretariat to the Board of Directors (incorporated in 2008).